Known for its formula combining a low center of gravity and high traction, Subaru Tecnica International, more commonly known simply as STI, has been Subaru’s in-house motorsport and high-performance division for 30 years. Founded on April 2, 1988, as a subsidiary of Fuji Heavy Industries Ltd. by Ryuichiro Kuze, STI has had more than 25 years of motorsport success. The division has continuously incorporated its competition knowledge into its desirable, confidence-inspiring vehicles.

Subaru’s STI pedigree in motorsport competition can be traced back to 1972, when a Leone (known as the GL in the United States) participated in the Southern Cross Rally in Australia. Eight years later, Subaru entered its first all-wheel-drive vehicle in the FIA’s World Rally Championship (WRC). Soon came STI’s first tuned vehicle, the Legacy Turbo, which was fitted with a 220-hp boxer-four engine, an upgraded suspension, and larger brakes.

In January 1989, the performance division took a Legacy Turbo, along with two others, out for the division’s first public outing as it set out to beat the FIA World Speed Endurance Record for 100,000 km (more than 62,000 miles). On each car, STI upgraded the engine internals, tweaked the turbocharger, and stiffened the drivetrain. It also added a stiffer suspension, larger brakes, a roll cage, and a deeper front air dam. Horsepower coming out of the boxer-four engine had been bumped up to 220. Averaging a speed of 223.345 km/h (138.78 mph), it took 18 days to break the record at the Arizona Test Center south of Phoenix.

This success resulted in the production of the limited production Legacy RS RA, STI’s first production car. The RS RA looked nearly identical to the regular RS model with the exception of “Hand Built by STI” decals. Its turbocharged flat-four engine put out 220 horsepower and had forged pistons, strengthened connecting rods, and revised intake and exhaust systems. The suspension and brakes were also upgraded, as well as the addition of a quicker steering ratio and a front axle strut brace.

Later in 1990, the division began competing in motorsport at the WRC Safari Rally. The Legacy RS, with drivers Jim Heather-Hayes and Anton Levitan, finished sixth overall.

The performance division continued incorporating their successful motorsport technologies into their production vehicles in 1992 with the Legacy STI. It built the limited production, Japan-only car to order. In 1994, the first Impreza WRX STI brought rally racing technology to the road. That same year, a version of Subaru’s Symmetrical All-Wheel Drive, known as Driver-Controlled Center Differential (DCCD), debuted on the Impreza WRX Type RA STI.

Throughout its first couple years of WRC competition, STI had some high finishes. The division didn’t get its first victory until 1993, though, when Colin McRae won the New Zealand Rally. The following season, STI switched to the compact Impreza and finished second overall.

STI became the first Japanese company to win the manufacturers’ championships for three consecutive seasons: 1995, 1996, and 1997. They were its only WRC championships.

In 1998, the company introduced its most desirable vehicle ever produced in order to homologate a wider-bodied Impreza coupe for the following WRC season. The 22B Impreza WRX STI featured gold BBS wheels and a 280-hp 2.2-liter turbocharged boxer engine that made solid boost in mid-range torque. With production limited to only 400 units, the Japan-only car sold out immediately after its announcement.

The Japan-only 2001 Impreza WRX STI S201 put out more than 300 horsepower. The company recalibrated its ECU and added a front axle limited slip differential and a fully adjustable suspension. The built to order S201 featured higher boost pressure and a larger, free-flowing exhaust. The following year, both the Impreza S202 STI and Legacy S401 STI were introduced as limited edition models. In 2003, the WRX STI S203, another Japanese domestic market car, pushed 321 horsepower out of its boxer engine and had a screaming 8000-rpm redline. STI redesigned the ball bearing turbocharger and improved cooling. Only 555 S203s were produced—again, to order.

It wasn’t until 2004 when those in the States could finally get their hands on Subaru’s flagship all-wheel-drive car. The Impreza WRX STI had a 300-hp turbocharged boxer engine was paired with a short-throw six-speed manual transmission, and the company upgraded the suspension and added DCCD All-Wheel Drive and Brembo brakes.

Meanwhile, the Forester STI debuted in Japan with the same 2.5-liter turbo boxer-four as the Impreza STI. It also featured an upgraded suspension, Recaro bucket seats, and Brembo brakes. The following year, the Legacy 2.0GT Spec B “Tuned by STI,” based on the fourth generation Legacy sedan and wagon, came out. While it wasn’t a full STI model, the Legacy had several STI upgrades. Under the hood was a 2.0-liter turbocharged engine, along with an upgraded the clutch, transmission, and ECU. Brembo brakes and a Bilstein suspension also made it onto the model. It produced the car in limited numbers for the Japanese, American, and Australian markets. In 2006, the WRX STI S204 came out in a built to order run of 600 units.

Soon after, the Impreza WRX STI Spec C Type RA-R debuted. Designed and built to homologate the Impreza-based Group C rally car, the road legal limited production car (only 300 made) utilized the 2.0-liter engine from the S203. Available in Japan, the S204 had many lightweight modifications, including aluminum body panels and thinner glass.

But in 2008, FHI ended its participation in the WRC after it started to be outclassed. But the performance division wasn’t done with its motorsport success. The company continued to supply rally cars for privateer teams in the series and then moved on to the Japanese Super GT series and the 24 Hours of Nürburgring.

STI entered its first 24 Hours of Nürburgring that year. Two years later, Tommi Makinen set the production sedan lap record at the ’Ring in an Impreza WRX STI Spec C, lapping the circuit in 7 minutes and 55 seconds. Later, STI won the SPT3 class at the grueling endurance event four times: in 2011, 2012, 2015, and 2016. It then went on to set records at the Isle of Man Tourist Trophy and the Goodwood Festival of Speed hillclimb, where it was third fastest overall.

In July 2017, the division set the lap record for sedans at the Nürburgring Nordschleife in a WRX STI Type RA NBR Special, which was built specifically to demonstrate the sedan’s capabilities and all-wheel-drive system. Its rally-spec, 2.0-liter boxer engine had a 75-mm intake and a turbo that ran at 250 psi of boost, resulting in more than 600 horsepower at 8,500 rpm. Its aero package produced more than 650 pounds of downforce at top speed, and the rear wing featured a drag reduction system, similar to those used on Formula 1 cars. A success for both Subaru of America and Prodrive, the car completed the 12.8-mile circuit in a blistering 6:57.5.

STI then released the 2018 WRX STI Type RA (for “Record Attempt”) to celebrate its successes. The limited production WRX had only 500 units allotted for the States and featured a carbon fiber roof, more horsepower, a Bilstein STI sport suspension, and a modified version of the Multi-Mode Vehicle Dynamics Control system. Additionally, the BRZ tS (for “Tuned by STI”) also debuted for the 2018 model year to help celebrate the performance division’s heritage, with an aerodynamic body design, an STI-tuned suspension, and 18-inch wheels.

When STI competed in the WRC, it dominated the series with 47 victories—more rally wins than any other Japanese manufacturer. And the division continues with its motorsport competition and record beating while allowing its racing technologies trickle down into Subaru’s production performance vehicles. Here’s to another 30 years of sticking to your rally roots, Subaru Tecnica International. 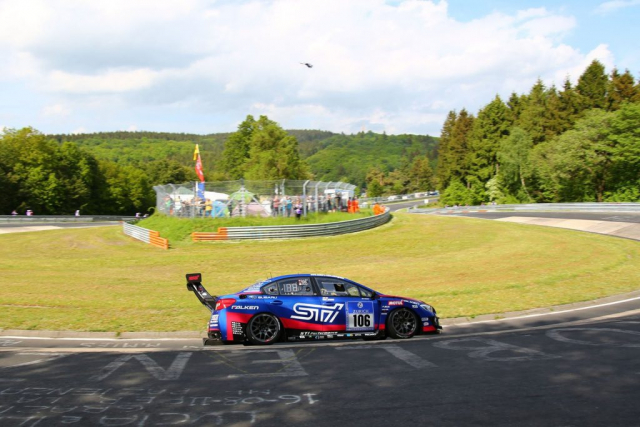 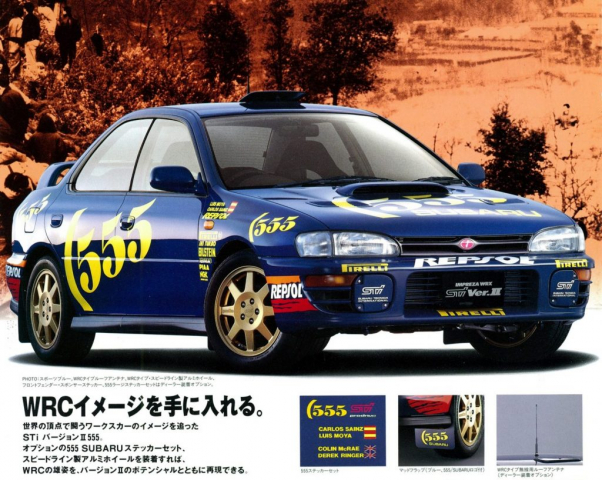 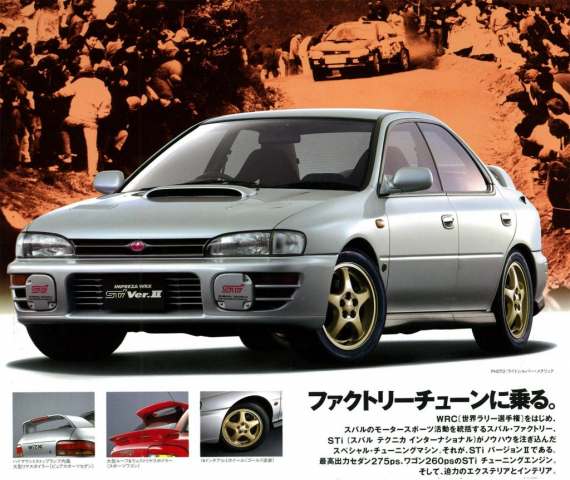 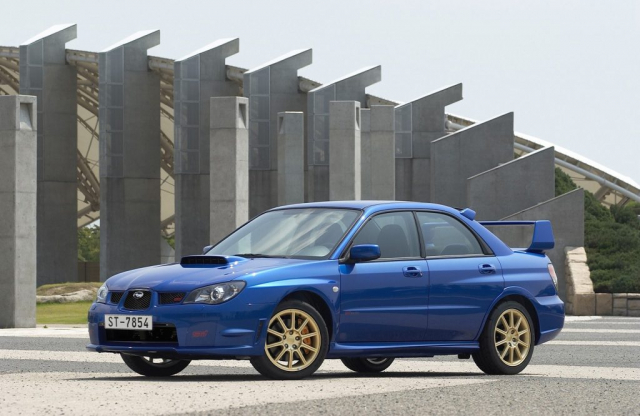 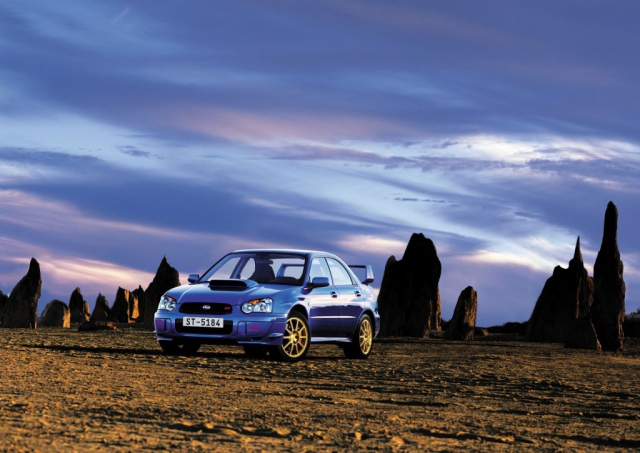 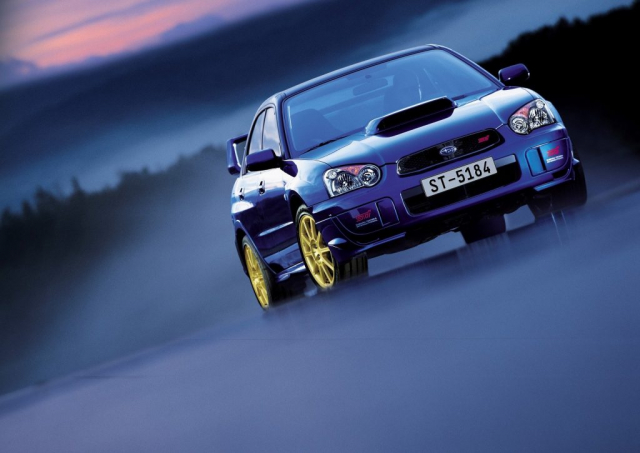 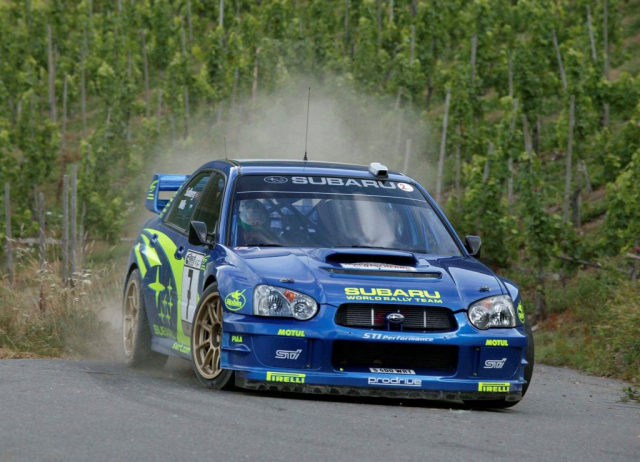 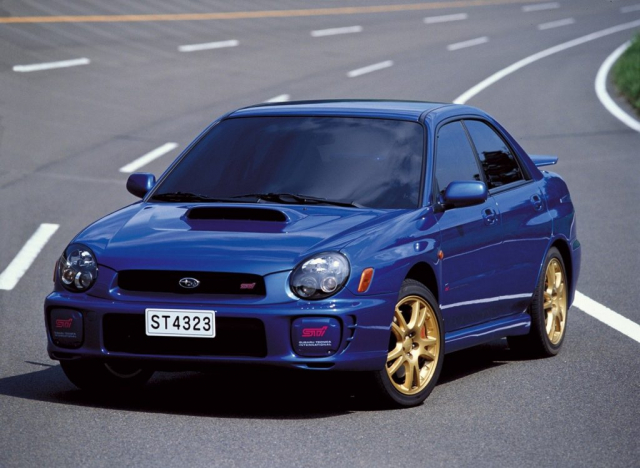 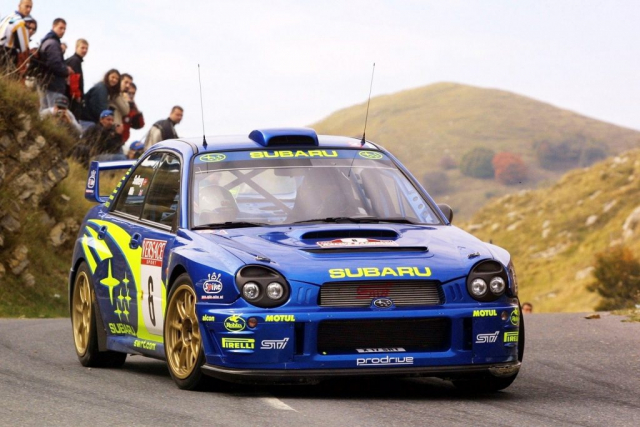 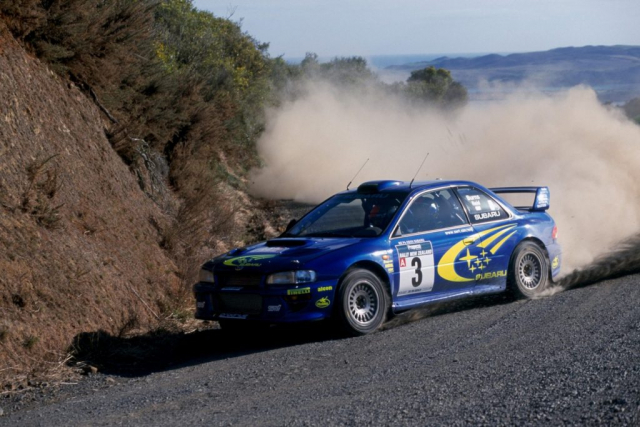 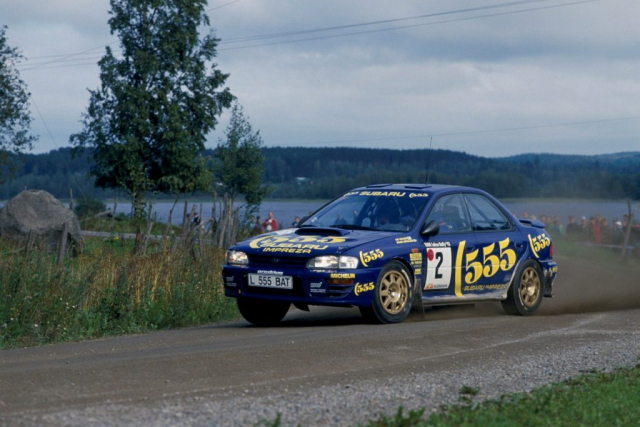 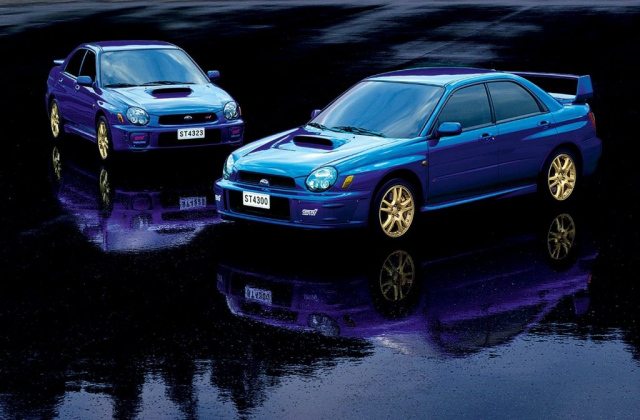 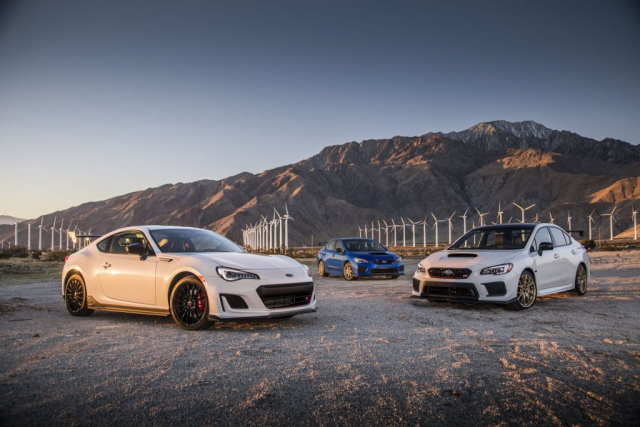 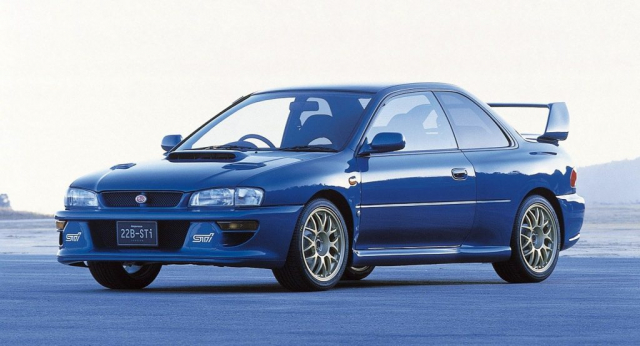 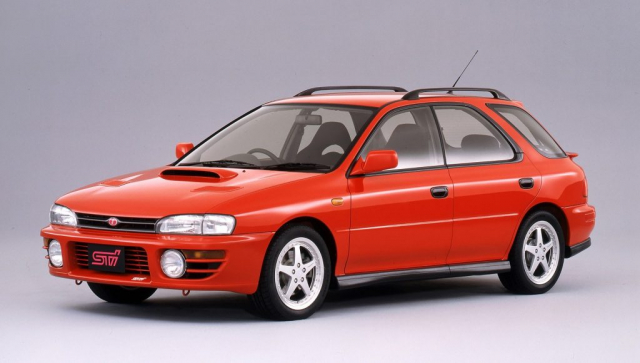